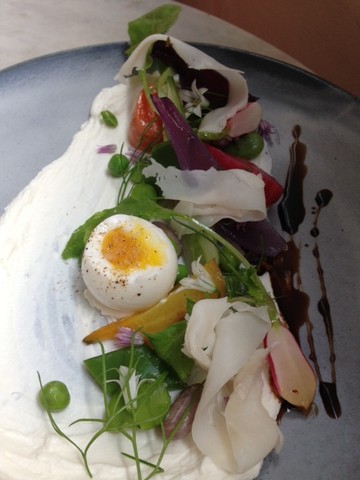 My table was located right in front of the kitchen's frontline. Five or six British lads, all very young, moved in a calm and pleased way, under the vigilant eye of a thirtyish beautiful chef who helps here and there, filleting the mackerel, ficelling the lamb fillets or cutting the lard. 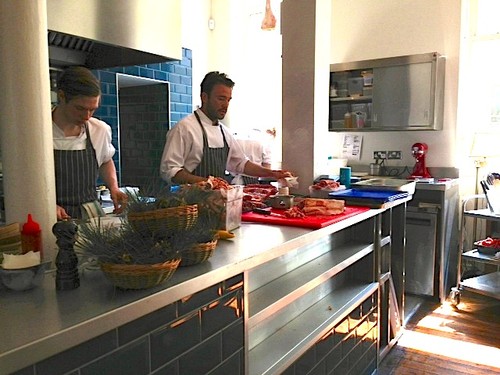 In a side table, one of the lads was shelling emerald green peas, sorting out the smaller from the slightly bigger, as "they don't all have the same cooking time". Simultaneously, he kept an eye on the small red timer that reminded him of rolling the sour bread dough that he transforms everyday in several 700 g beautiful loaves. So tasteful I could come here just for the bread and butter. 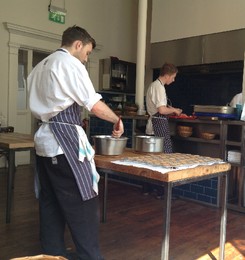 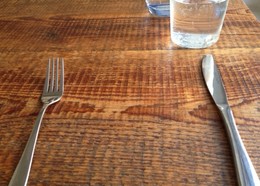 I am having lunch in the recently opened The Clover Club, in the East Side, headed by Scottish Isaac McHale. The chef being absent in that day left the restaurant under the command of next in line, Tim Spedding, English born. Both of them are ex-The Lederbury and recently had a celebrated Pop Up. 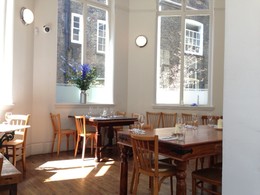 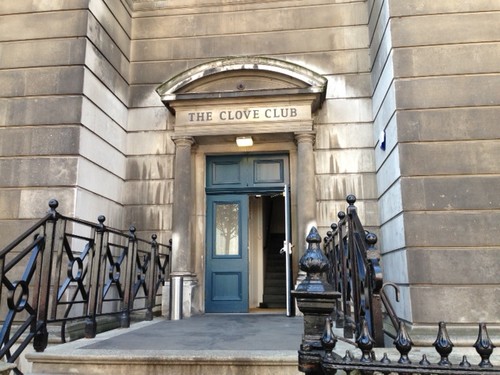 Shoreditch, the restaurant area, is located in the londonian East Side, an old area where recently bloomed modern corporate buildings of IT (information Technology). These brought along hordes of young people, responsible for new venues in the Food business.

If you plan flowing my advice and go to The Clove Club, take advantage of the morning to make an exploratory walk both of the old and new sections, around Old Street and Liverpool Street. This area has the world bigger concentration of purple hair per square foot. 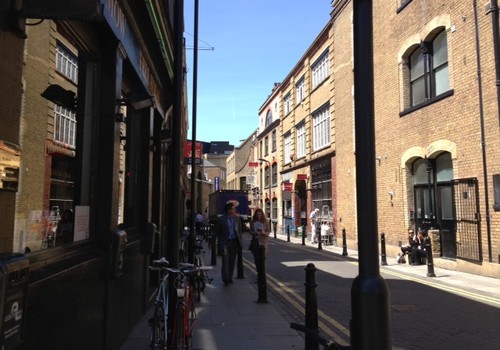 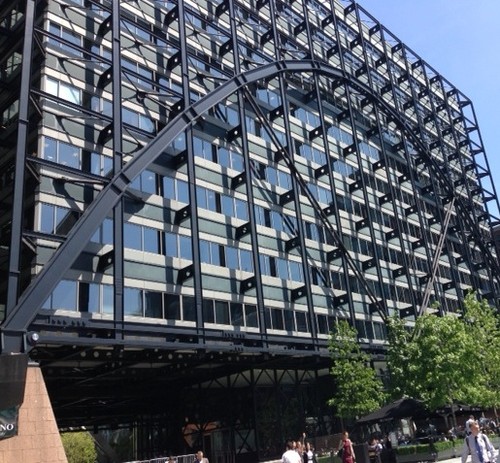 The new IT part, around Liverpool Street 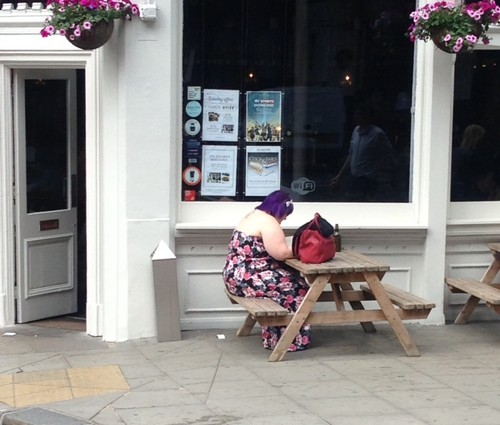 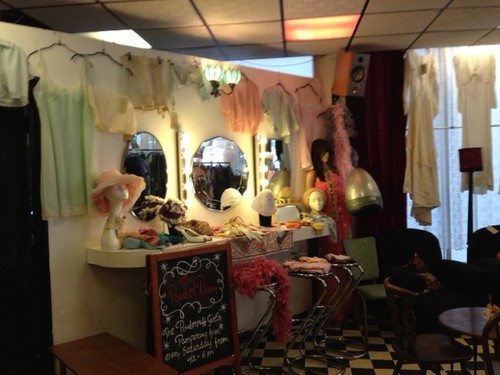 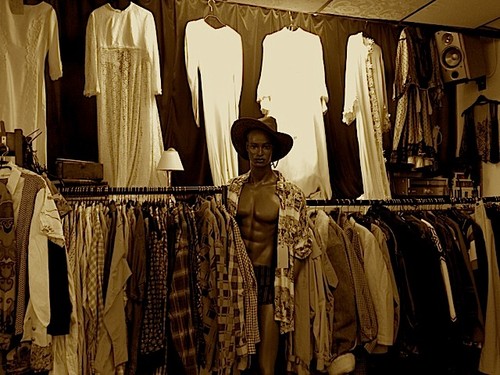 The Paper Dress (here) is a must to visit, to buy or simply breeze through vintage second hand clothes, eyeglasses, purses, or simply to have a very aromatic espresso at the counter.

Further down the same street (Curtain Road), one can rent a bike and cycle around like the locals do. Go see the graffiti by world famous grafitter Banksy, coveted by collectors all over the world. In the Cargo Beer Garden (Rivington Street) it is possible to see His Master's Voice, a famous Banksy piece. (If you are interested in the graffiti, see here.) Banksy success led the building owners to commission grafitters to cover their own walls! 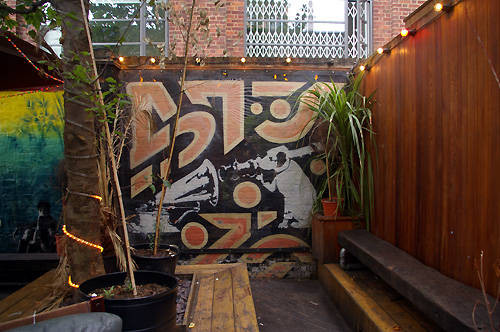 This is The Clover Club’s environment. The restaurant is located in a beautiful neoclassical building, the old Townhouse, where between 1955 and 1975 took place boxing combats and where took place the first TV in England and where today many events occur. 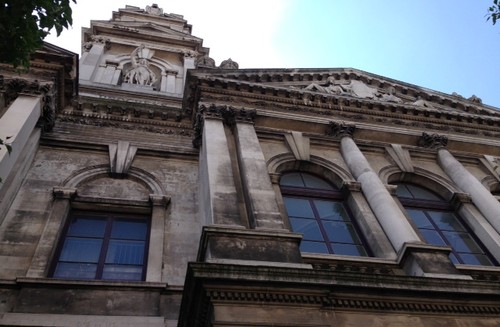 The decoration is simple, high and low tables in warm wood, almost monastic with the exception of the attractive art deco bar, home to the mise en scène of many cocktails, entitled to a special menu. The service is courteous, well humoured and relaxed, as it should. 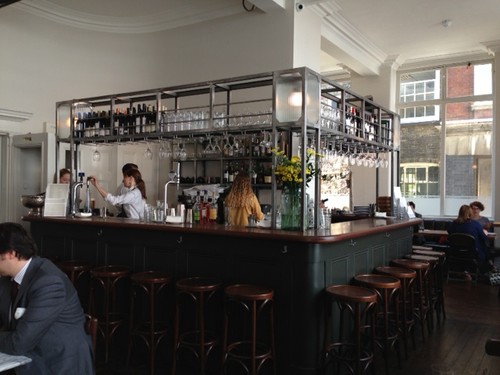 Let’s start with the menu analysis than. Lunch time, one can choose à la carte, with specials everyday, or a Set Menu, which was my choice, in order to broaden the tasting dishes. A first glance shows that, besides the season produce, the meal’s structure is based on british ingredients, such the braised mackerel, the lamb, the Cheddar, the charcuterie and the vegetables (cucumber, leek, peas, mint). All politically correct, plus the existence of a vegetable garden in the premises. 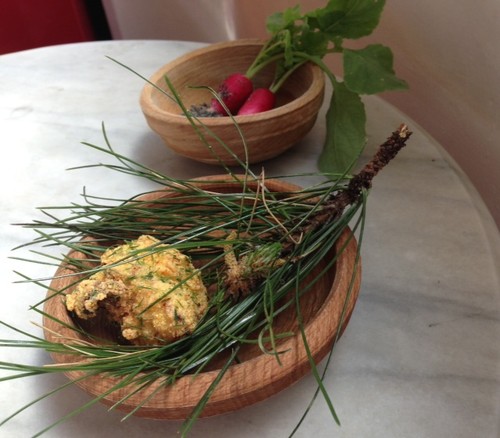 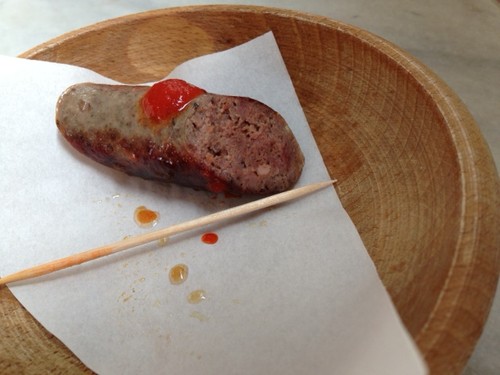 My head, heart and stomach are immediately won over by two simple breakfast radishes, spiced qb, with a gochuchang sauce (a Korean condiment) and black sesame seeds. Simultaineously, came a sort of chicken nugget, previously marinated in buttermilk e fried, nothing I ravished about. The last appetizer, a well-seasoned pigeon sausage, came with ketchup in the Ten Bells pub, another Isaac’s premise. I was thrilled to see charcuterie coming up strong. 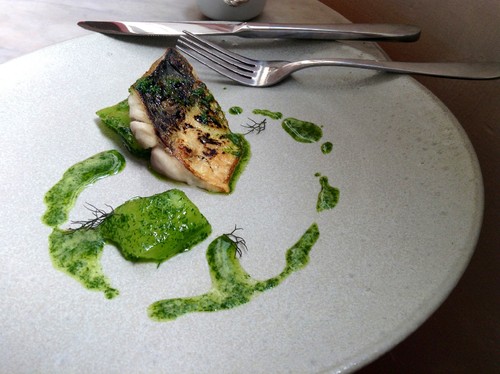 To separate appetizers from main dishes, a multicoloured salad starring all spring vegetables raw or cooked on a brushstroke of ricotta and thin lard slices. I loved the incredible taste of the carrot and the miniscule garlic flowers. However, as the main dishes start to appear, accompanied by Tim’s comments, I start to grasp the balance and boldness of certain combinations. Mackerel, fished in the cold Cornwall seas was fresh, mild taste and correct. Braised, it married perfectly with the low profile cucumber, maybe because previously crushed and drained, with the dill sauce and elderflower vinegar. 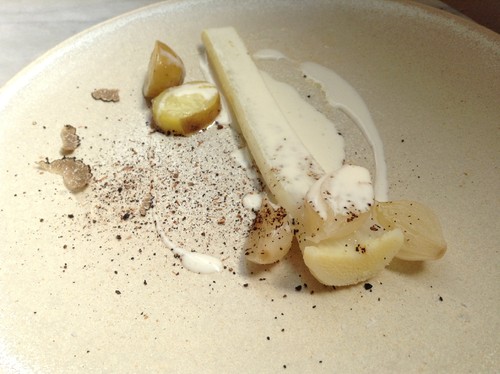 My favourite came next. I love minimalist dishes that allow each ingredient to present itself in full perfection, unsurpassable, in a combination seen as unique and natural it is the case of this monochromatic Musselburgh Leeks, Jersey Royals and Keen’s Cheddar (artisanally produced with non pasteurized milk), with one or two pickled pearly onions. The leek’s variety is rustic and of generous size. It grows in Winter/Spring in Edinburgh region.

The tiny tiny potatoes, that I saw wash with utmost care, are from the jersey shore. The sea lends them a non-sweet taste, rather on the salty side, enhanced by the cooking in a seaweed broth. Pearly vinegar onions and cheddar give the dish the final zing. Perfect. 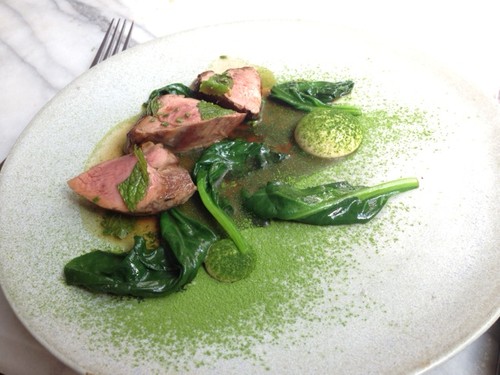 The boldest dish was a faux sea-land. When I saw the lamb fillet in the company of several sea creatures, such as the anchovy sauce and the kelp I thought the animal was going to drown in all those marine flavours. I feared the worst. But, curiously enough, when I tried my first forkful where I piled all the ingredients, surprise. The first sensation was that all those sea elements were nothing but a seasoning to the lamb, that in the emerged in all its strength.

I loved that challenge, bold and a winner, in part because the lamb has strong flavour, nothing of the lactant kind. Tim told me about the passion for anchovy that the garum spreading Romans left in the British Islands. 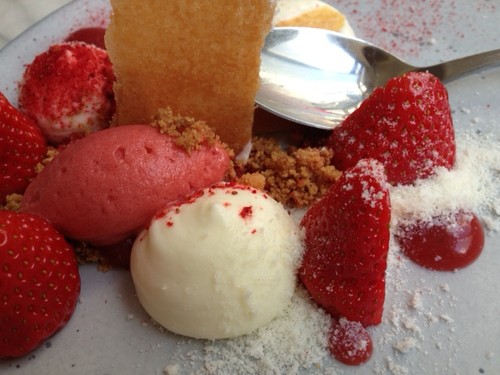 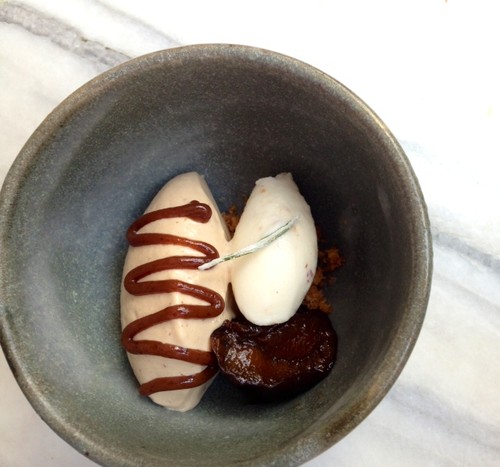 To finish, two very English mignardises. Bah. A teacake and a Fernet drop, a drink that subsumes the entire herb drinks of the world… 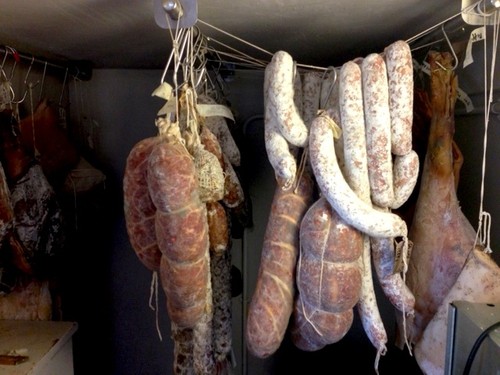 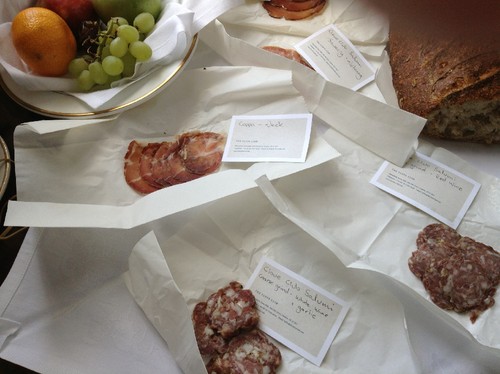 In the end, Tim took me to their smokehouse, full of hams, coppa, salami and pork bellies. Wonderful all that charcuterie that I tried later with some more of the bread.

The Clover Club is one of those places where I could eat everyday.  I will come back. 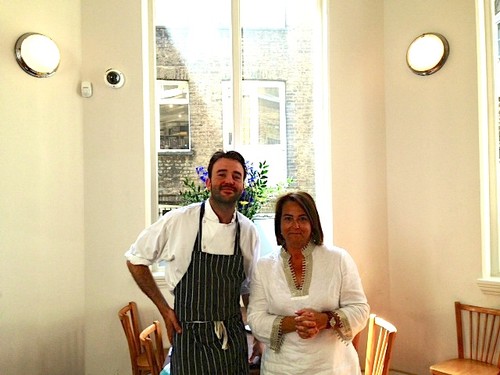